Design translates a city to the world

The challenges we are being presented with sometimes bring us to beautiful places. When the city of Parma approached us with the question ‘can you translate our city to the world through design?’, for example. The city won ‘Capitale Italiana della Cultura 2020’ (Italian Capital of Culture 2020) and needed to become more accessible to both native Parmigiani and tourists in advance of the celebrations. 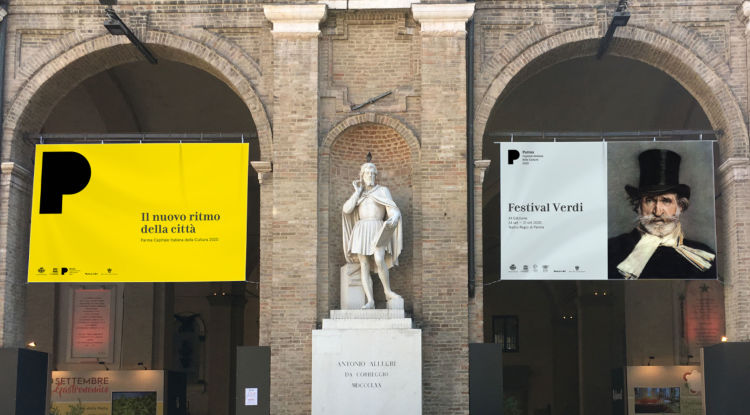 The Italian capital of culture. A capital, however, not many of us have been to. Yet.

Everyone recognizes the name Parma: it’s where your favorite pasta, ham, and cheese come from. But have you ever been there? Can you point it out on the map?

When people think of Italy, they tend to think of huge, famous cities like the ancient ruins of Rome, the fashion-forward streets of Milan, or the canals and gondolas of Venice. But some of Italy’s most successful exports come from Parma: the pasta brand Barilla, Prosciutto di Parma, and, of course, Parmigiano– no pasta dish is complete without it. But for a place that has produced such prolific and delicious brands and products, it’s a relative unknown for most people.

The old city branding wasn’t comprehensive and flexible enough anymore, to cover the wide range of needs that the city was facing and a step towards a more digital era was now needed. The branding lacked a systemic, generative approach and no longer reflected the city as it was: a cultural hub, both of art and food, and one of Italy’s most progressive cities (Parma’s two-term mayor, Federico Pizzarotti, is the founder of Italia in Comune, a progressive green party).

So our challenge was to ‘translate Parma to the world’ by designing an identity that brought together the different elements of the city’s history, culture, and future even beyond 2020. We didn’t want our branding to appeal just to tourists, but also to the city’s residents: it had to be participatory, bringing together those who know nothing about Parma and those who have spent their entire lives there.

Simple yet strong elements arranged into an easy-to-use digital toolkit so that any layman can access a wide range of tools, assets, and resources. It’s not just about creating the resources – it’s about making them simple and accessible so that anyone can use them. We approached it like an Italian dish. ‘You only need a few excellent ingredients to make a delicious meal,’ says Edenspiekermanns Christian Hanke – ‘and the Italians know that better than anyone!’

The creation of a design language centered on a few relatively straightforward elements, like the bespoke modern interpretation of the classic Bodoni font, the strong, striking cut-out P and the vibrant, cheerful yellow to represent the intersection of classical Italian culture, political progressivism, and a dynamic future.

The yellow of Parma is an immediately recognizable element of the city’s communications. ‘Yellow is the color of Parma,’ says designer Chris Merk, pointing out the yellow of Parma Calcio, the local football club, as well as the official color of the Comune di Parma’s coat of arms, not to mention the warm tones of the sun-washed sandstone in the evening sunlight.

We also employed Zuzana Licko’s interpretation of Bodoni, Filosofia. ‘The Bodoni font is intimately connected with the history of Parma,’ explains lead designer Uta Hentschke. The creator of Bodoni, Giambattista Bodoni, was an adoptive Parmigiano who spent most of his professional life in the city as the Director of the Royal Press in Parma. ‘We had to use Bodoni for its history,’ adds Uta, ‘but the challenge was to use this ‘old-fashioned’ typeface in a modern way that reflected Parma’s progressive identity.’ We developed a custom version of the font Filosofia for the city of Parma, which was optimized for both print and digital settings.

Finally, we needed a simple but memorable visual element to complete the trio: a bold P! This idea was especially successful– just search ‘#Parma2020’ on Instagram for proof! We wanted to make sure that our components worked in both digital and print settings, and could be reconstituted into infinite artifacts: digital elements on the Parma2020 website, physical posters and banners that could be placed around the city, brochures, and more.

The people of Parma engaged wholeheartedly! Our designers spent a weekend in Parma and saw how the community came together to celebrate the city’s revitalized identity. Fifteen thousand ‘Parmensi’ paraded through the streets, waving banners, flyers, and big black P’s. ‘It was astounding to see the entire city of Parma pour out onto the streets, waving our designs in the air and singing– it’s a real testament to the power of design to bring people together. A few recognizable visual elements can really help instill a sense of community and inspire huge engagement,’ said Martina Dellepiane, the project P.O.

Ultimately, the project was about much more than a few reusable elements– it was about defining the identity of an iconic, ancient city as it modernizes. A future-proof way to identify with an impressive place. ‘We designed the ingredients to build an inclusive, empowering identity for the city of Parma,’ explains Martina. ‘It was a privilege to engage with the people of Parma on such an emotional level,’ said Christian. ‘We hope that through our work, many more people will get to visit and fall in love with the city!’