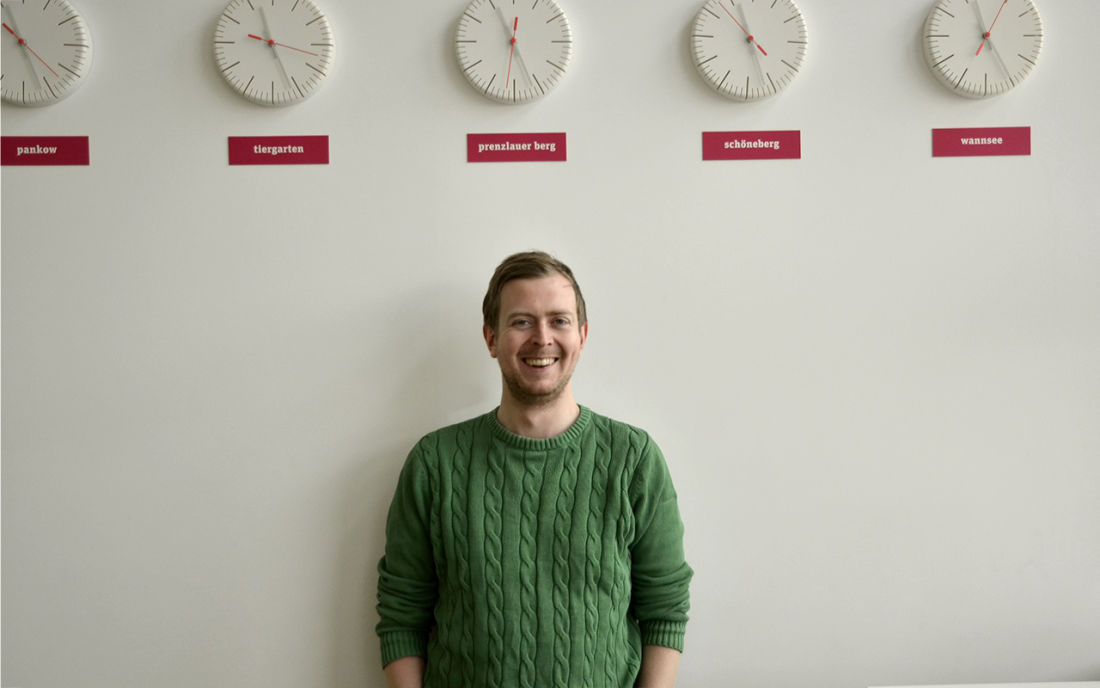 He did his first paid design job back in Reykjavik in 2001, but it wasn’t good design, he says. “I mean I wasn’t even thinking if it was good because I was so excited doing it” – a CD cover for a marching band. “I actually played the french horn, yes.” Eythor quit high school for art school.

“But this does not answer your question about what I did before I came here. I did a lot. What do you want to know? Everything or what I did right before I came?” His choice.

“Okay. What I did was I worked in a book publishing company. I did book covers, the typographic stuff, interactive web banners, print ads, screen ads, everything.” Bridging on- and offline, obviously? “Yes, of course. And then, three months before I came here, I was sitting at home making music when I suddenly realized that my life was like in Groundhog Day, you know that movie? Iceland is a very small country. You get that déjà-vu feeling all the time. So I decided to buy a one-way ticket to Berlin. And on the next day I quit my job. Then it took those three months before I could actually leave. I knew I had to do it and I just did.”

“And yeah”, he smiles, a little triumphantly maybe, “I decided to do it and just came here to Berlin – on the second day of Christmas. Last year.”

Ready for question number one? Here we go, Eythor.

“Oooooh …” He smiles gently. Looks out of the window.
Another “Ooooh“, with a big warm smile: “Well it’s beautiful.”

“The third one, mmmh … touristy. But that’s very recent. And it’s not necessarily a bad thing. There has been a lot of publicity; ‘Game of Thrones’ and ‘Oblivion’ have been made in Iceland. It’s kind of weird but they started doing these films and then all these tourists came. Maybe it’s connected. Some years ago you could walk around and still see Icelandic people. Now you see all these tourists wearing 66 degrees North jackets. While the Icelandic people just wear jumpers. It was similar before the economic crisis in 2007; there were lots of Polish workers and you could hear Polish everywhere, yes.”

“If you eat a Hamburger every day you just get bored of it. I’m addicted to new stuff. Berlin has variety. Whenever I’m bored I take the U-Bahn and go somewhere and there is something new. It takes only 20 minutes to change your perception.” This is the perfect switchover.

“Mmmh, okay.” He straightens his back and looks serious.

“It is variety.”
“It is adventure.”
Short break. Still serious.

“And it is the first place I had ever felt at home.”

This gives me the thrills. It’s very much the same for me, but why so for him? I moved about 25 times in my live, he did only once, and never before.

“I lived in Iceland for 29 years. I came here, and it was like this. Instantly. Which is very odd. Even though I didn’t speak the language. It’s hard to describe.” Yes. I know exactly what he means. And yes it is hard to describe. We try, together, exchanging Berlin impressions: “You can dress up in a chicken costume and nobody would pay attention. You can wear what you want and be what you want.”

“The thing is, I’ve had this question before. By Berlin friends. I always have to describe it. People wouldn’t believe it: That we are not forced to overwork and burn out …”

“And there is something else: You feel like an equal.”

“And this is the first job where I wake up excited every day.”

Looks like he will stay and continue to wake up excited.

Thanks so much, Eythor!