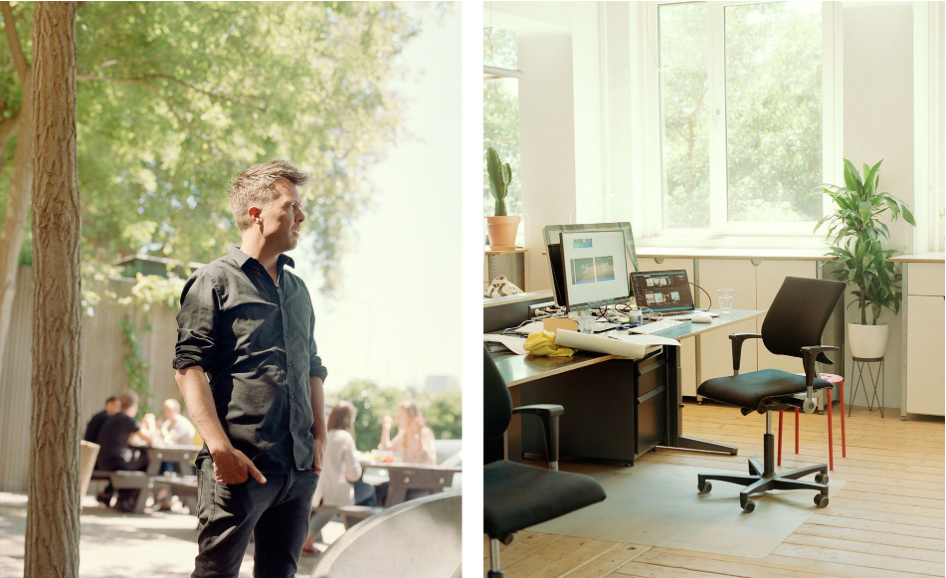 According to the manifesto on their website, Edenspiekermann has a healthy attitude and every now and then a big mouth. This could be a description of Jonne himself and probably explains why he fits right in.

After half an hour, a flipchart in the meeting room is fully covered with graphs and drawings on the relationship between energy, business and ambition. Managing expectations and relationships between the company and the customer as well as managing his teams are all important elements to keep under control.

Jonne knows from experience that no designer can ever fulfill his full ambitions in a project. After all, you always end up against the wall: before you reach your goal the customer is already dropping out; mostly due to budget, bureaucracy, or personnel changes.

It is therefore better, according to Jonne, to go much further than your initial idea or briefing. This way both you and the customer will go much further than the inevitable wall that you encounter when you try the ‘small-steps’ approach. Of course you have to make concessions to your big dreams, but in the end a big idea brings you beyond slow growth.

Wanting to dream big is in the blood of Jonne, but also in the DNA of Edenspiekermann as a whole. Coming up with a great idea takes a lot of energy but is rewarded by exciting projects. “The only thing you sell as a designer is energy,” says Jonne. “You sell the promise of the forest. However, now there is a dry field, but there will soon be a wild forest here, with hills, rivers and animals. Do you see yourself walking through this?”

What does Jonne mean by this? “We sometimes forget that something that we find imaginable can be unimaginable for our customers. This is why the role of the designer is important; they must try to visualize these concepts and make them conceivable.”

In the conversation, the bold co-founder of Edenspiekermann is also discussed: Erik Spiekermann. A man who, with his 71 years, overflows with energy and does not hesitate to open his mouth. His mentality, big mouth and transverse character are irrevocably integrated into the company’s culture, says Jonne.

“Designers also need this mentality in my eyes. With this, the design sector can learn something from the advertising angle. Designers are often introverted and may well have a larger mouth. You have to be really convinced with your idea, otherwise you cannot transfer it with energy either “And you need that conviction to be able to get the big jobs.” It is important that you know what you are talking about on the business side of things. This is something that Edenspiekermann takes to heart and implement in the training of their staff.

Another way in which Edenspiekermann keeps the team fresh and energetic is through the international nature of the company. With employees flying regularly to the offices in Los Angeles, San Francisco, Berlin and Singapore it only makes sense that we are left with a cultured group of individuals. The execution is generally done locally, but consultancy and knowledge of the local markets is arranged by people from the offices abroad.

For example, as a client the Dutch company Quooker can get direct input on the German market at the Edenspiekermann office in Berlin. “Does that international character bring energy? People who travel know that too: new people around you, new insights. That always gives energy.”

“It is not always easy, there are certainly blood group differences between the different countries. As Erik Spiekermann often says, for example, ‘Germans take their humor rather seriously’. Well, that’s right and that will sometimes collide.” Is managing teams then purely positive work? “No, energy is sometimes gone”, Jonne indicates. “When things are difficult, when organizations change, we also have to change, a continuous process of change, it’s difficult, sometimes you have to deal with a few bumps, that you don’t see coming. So keeping the energy high, how do you do that? There is no prescription for that.”

The enthusiastic conversation comes to an end, with Jonne at least. He would like to introduce us to three of his design directors with whom we will talk about the daily ins and outs within Edenspiekermann. You can read this soon in the second part of this interview.

This article was originally published on https://www.bno.nl/blog/artikelen-10/post/edenspiekermann-design-with-an-attitude-137