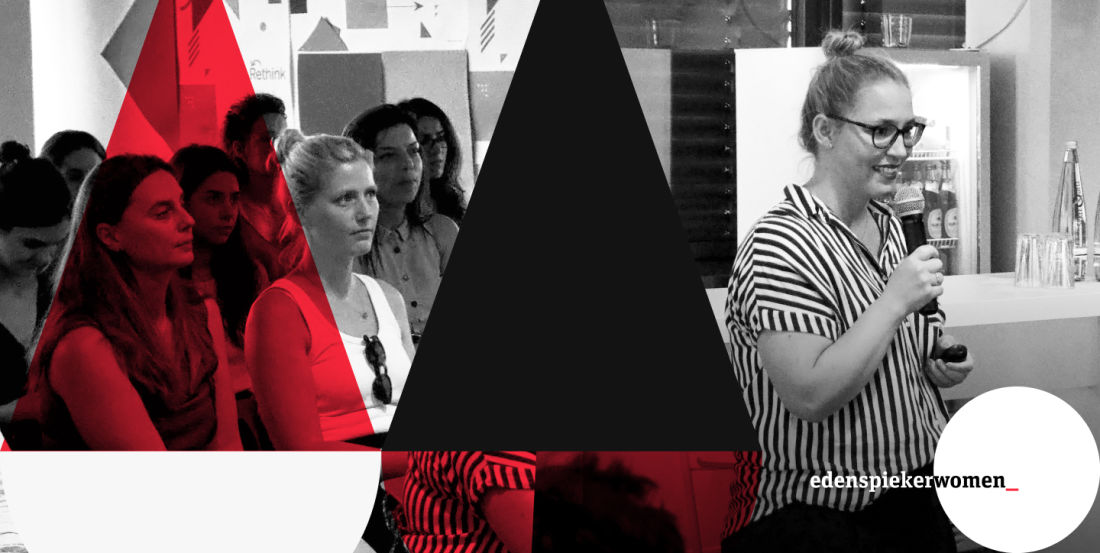 This week, we hosted our second Edenspiekerwomen event, Liberty&Law, hosted by Katharina Seeger and featuring talks from Theo Kauffeld and Denise Feldner. In today’s world, we often find ourselves confronted with questions about both freedom, equality, and legislation that can effect changes in these areas. The rise of the internet has, of course, fundamentally altered the playing field, bringing together diverse people and ideas and creating new intellectual and cultural spaces. The question of how to regulate these spaces and the effect on our society is one that has plagued politics and tech for decades now– and as content creators, we at Edenspiekermann frequently confront these issues, so we decided to delve into these topics by exploring Liberty&Law and the relation between them.

Theo, who founded the Equalista app along with her sister Louisa, outlined how unconscious biases are still pervasive in our culture today and how we might combat them. Denise, on the other hand, took us through the history of law and how the rise of the internet poses one of the greatest fundamental challenges to our legislative and cultural norms today. Read on for more details!

Theo opened her talk by posing a few questions: ‘Who among us is a feminist?’ Nearly everybody raised their hands. But when she asked ‘Who among us is a sexist?’ no hands went up. But, as Theo explained, that’s the issue: many people don’t think of themselves as sexist, even though research from Harvard University shows that 85% of people actually hold unconscious gender biases– Theo herself admits to being one of them. And because so few people think of themselves as sexist, many women are unable to see themselves as either victims or perpetrators of subconscious sexist tropes. In today’s world, many instances of sexism are small but pervasive, and eventually have a compounding effect. After being told all of our lives that we are indeed equal to men, that we can do whatever we set our minds to, many women are unable to react effectively to moments of sexism or even recognize it– as Theo put it, ‘it’s always the others who are affected by it– until it’s you.’

Theo, who worked in the male-dominated oil and gas and IT industries before joining up with her sister Louisa to create Equalista, has firsthand experience in this. Theo is one of the generation who was socialised to believe that men and women have achieved parity, so it was very hard for her to see herself as a victim of sexism or discrimination; after all, she’s strong and empowered, and strong and empowered people can’t be victims, can they? But after working her way through the ranks, she found herself at a performance review where her feedback was, ‘you should really smile more.’ This is, of course, recognisable to all women – who among us hasn’t been told something along these lines at least once? But for Theo, it was a moment of epiphany. She realised that despite the supposed equality of the genders, there were still many subtle, pervasive forms of sexism permeating the workplace and society – and she set out to find a solution.

The good news is that Equalista is here to help educate both men and women (and everyone in between) in the field. ‘We seem to solve every problem with apps– why not this one?’ Theo asked. Described as being a sort of ‘Duolingo for sexism,’ the app will help explain terms like ‘misogyny,’ or ‘patriarchy,’ first by giving definitions, and then introducing users to real-life situations in which they might encounter such biases. Through games and tasks, the app will allow users to explore examples and reactions to sexism in a safe, neutral space and will enable them to make active changes in their own lives. The app is meant for both men and women – after all, we all have the same socialisation, and it can help all of us confront our biases.

Equalista will be in the app store in early 2020, so keep an eye out!

Denise is a lawyer by trade, so it’s no surprise that she took a legal perspective on our theme. She took us all the way back to ‘primitive’ law systems from early human history, when the priority was to peacefully resolve conflicts (in this sense, the international law promulgated by the European Union and United Nations can be considered a ‘primitive law system,’ since its primary purpose is to keep peace between nations). From there, we moved to Ancient Greece, where the beginning of democracy led to a code of laws designed to maintain social groups, and then to Ancient Rome, where the Codex of Justinian became the basis for today’s Western legal system. With the Reformation in the sixteenth century, authority was removed from the church, while the rise of Enlightenment thinking in the next century meant that the focus of lawmakers shifted to human rights and individualism. Here is where ‘liberty’ and ‘law’ begin to converge: at the point where legal systems became more than just a set of rules to keep peace and maintain social ‘in-groups’ and ‘out-groups,’ and began to concern themselves with the rights and happiness of individuals. From a utilitarian point of view, this means that the goal of any legal system is to ‘enable the maximum happiness for the maximum number of people,’ as proposed by Jeremy Bentham in the nineteenth century.

But how does this affect digital law? Firstly, these laws were developed to regulate physical spaces. Digital spaces pose a massive regulatory challenge to legislators in any law-making body. How do you regulate an intangible space that is often difficult or downright impossible to monitor? How do you work with enormous tech companies to achieve this goal, many of whom have their own agenda? And what happens when potentially illegal acts cross national borders, which is increasingly easy when two people don’t need to be in the same physical location to communicate? These are major questions that have tormented governments and society for quite some time now, and they are becoming ever more present. And, of course, the rise of connectivity means that our Western-centric view of the world, and the primacy of Western legal concerns in international systems, will be fundamentally challenged as developing nations– like China, India, and Brazil– become more and more powerful, particularly in the tech sphere. How will the West adjust itself to accommodate the convergence of different belief systems in innovative spaces? There are no easy answers to these questions, but Denise’s book,‘Redesigning Organizations – Concepts for the Connected Society,’ (LINK) provides some interesting perspectives.

Thank you to everyone who came, listened, and asked questions!

We really appreciate your enthusiasm and engagement with the subject. After all, it’s not just about having a nice evening of fancy snacks and drinks from Belsazar– it’s about having a really good conversation about an interesting and important topic. And thanks to our wonderful guests and our amazing speakers, we definitely succeeded in that!

Sign up to our newsletter for updates on our next installment in the series, which will take place in Novemeber!