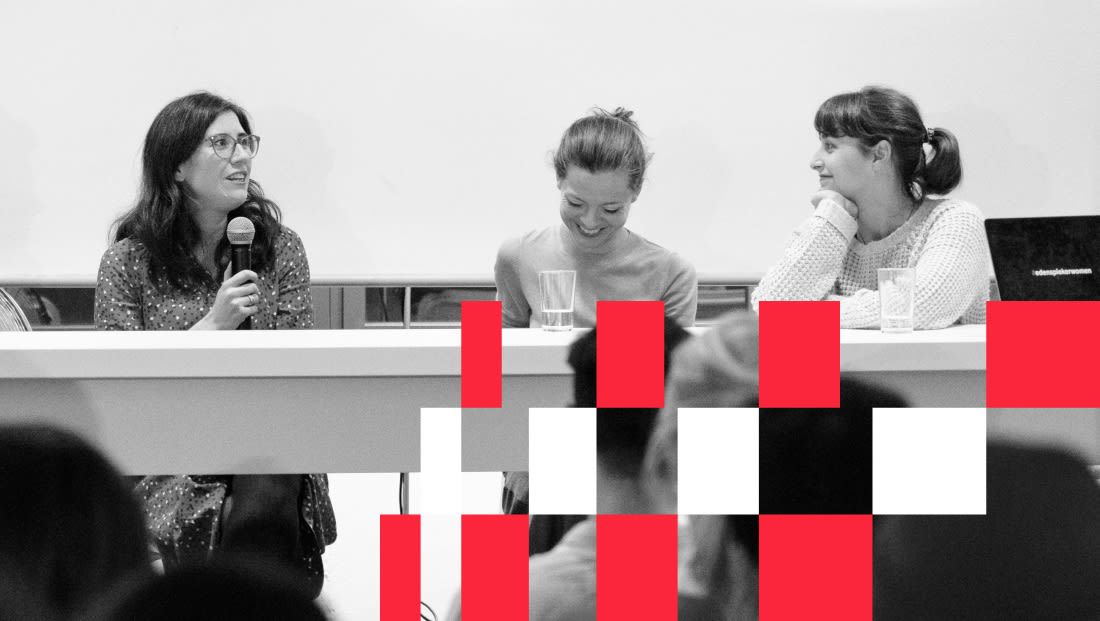 In the first week of November we hosted the third episode of our Edenspiekerwomen event series, Elevating Education. Edenspiekerwomen was established to showcase brilliant female minds in tech, with each episode honing in on a specific topic. This time, we chose to focus on education. It benefits both children and everyone else on an individual level – developing inquisitive minds and frameworks for deep thought as well as enriching our society as a whole. Even once you reach adulthood, you never stop learning– it can be done at any age.

Our three speakers were media educator Kristin Narr, Franziska Schmid, co-founder and CEO of Junge Tüftler and TüftelAkademie, and Susanne Maurer, Marketing and Business Development Lead at Quinoa Bildung. Each presented their own individual take on Elevating Education, but they shared a passion for using education as a tool to benefit both children and adults in innovative, fun ways. Read on for recaps of their talks!

As a media educator, Kristin thinks of herself as a translator between the school world and the digital world. That means that she’s ‘fluent’ in both languages, able to navigate the channels between the two worlds, their requirements, and how they could combine to create a better future. So Kristin asked, ‘what is the ideal school setup? And what would the workspaces look like in such a place?’

The answers to these questions led her to a quest to combine creativity and learning. The first ‘Maker Days for Kids’ took place in Leipzig in a project space originally meant for adults. The kids were given free reign of the place, which included stations for woodworking, analog photography, laser cutting, game design, and DIY. Around 60 kids joined in, working in teams to produce a product by the end of the day: talking robots, mini-documentaries, or tiny sculpted villages populated with fungi-people. The point is for the kids to learn in a fun, creative, engaging manner – and the kids weren’t the only ones who had fun. Plenty of the parents joined in too, and Maker Days for Kids has since expanded to two other cities in Germany, with more big plans in the pipeline!

Susanne: Every Year is the Year of Quinoa

Suse has worked in the non-profit sector for much of her career, using her academic expertise to benefit people who don’t have the same privilege. That’s how she came to Quinoa Bildung, which was founded in 2013 (it’s named after UN Secretary General Ban Ki Moon’s declaration that 2013 was ‘the year of quinoa’). Quinoa approaches education with the knowledge that often, a student’s success in education is predetermined by their social status: in Berlin, 11,6% of students leave school without Abitur (a German diploma), which translates to over 6000 students. Of these, 96% have a migratory background. In this sense, where you come from has an effect on where you end up.

Quinoa was established as a small-scale solution to a massive problem– a test case, if you will. It was founded in Berlin-Wedding, a district that suffers disproportionately from these issues. The school’s program includes intercultural learning, relationship work, a tutor for each student, and a subject known as ‘Zukunft’ (‘future’ in German), which encourages students to look ahead and think in the long term. The school also works extensively with students on language, since many of them (80%) come from migratory backgrounds. The results are startling: 92% of their students graduate with a degree, and those who don’t receive coaching and support. That’s a 20% improvement over the district’s usual numbers. And many come back to visit even after leaving, creating a real sense of the ‘Quinoa community’. So far, the ‘test case’ has been quite a success, and Quinoa has plans to grow!

Franziska comes from a product-design and design agency background, so her approach to early learning draws on lessons from her design experience, like agile thinking and a ‘holocratic’ structure. Her design background also taught her that to truly function in the modern world, we must understand technology– its almost ubiquitous presence in every aspect of our lives means that it would be irresponsible NOT to teach kids how to interact with it. There are many possible futures with technology, some positive, some negative – but regardless, we have a responsibility to be aware that our use of technology shapes our possible futures. And without understanding how things are built, it’s much more difficult to change them. Thus, it is of vital importance that we raise the next generation with the knowledge, skills, and capabilities to take on our new, increasingly digital world.

That’s how the TüftelAkademie and Junge Tüftler were born. The goal is to make tech fun, playful and human-centered. Tüfteln actually means ‘to tinker’ in German, which expresses the soul of the endeavor. As Franziska put it, ‘less talking, more making.’ For adults, that means discussing and exploring tech and building functional prototypes. For kids, it’s geared more towards camps, projects, and make-a-thons. Kids are excited to build functional things– it teaches them that their ideas matter, and shows them the gratification of working hard on something to achieve a final, tangible result. It helps them understand their own possibilities and responsibilities as citizens of a digital word.

So what did we learn?

Basically, the more fun learning is, the more you absorb! Both kids and adults are excited to learn, especially when you structure things in a way that allows people to utilize the full range of their creativity. Learning happens every day, no matter what – the human brain is built to store, synthesise, and process information, after all. But that doesn’t mean we can’t make it more effective and enjoyable. That’s actually the point of Edenspiekerwomen: learning! Every event is filled with inquisitive, interested people who want to educate themselves about the cool stuff that women are doing in tech. And without our guests and their enthusiasm, we couldn’t pull off such great events. So thank you to our audience for your attentiveness, great questions, and passion! And thank you to our speakers for their fantastic talks!

Join our meetup group and subscribe to our Edenspiekerwomen newletter to get updates on our event series!

See you all next time!